Disclaimer:
This basic guide is aimed at people who have at least a basic understanding of scripting or programming (JS, PHP, C(#/++), Java, Python, ….). If you’re not familiar with it this will probably be Chinese for you and you might wanna skip this.

Pretty simple and straight forward. The bitwise version of this does the same but on a per bit level. So, a bitwise XOR operation on 2 bytes will compare the bits (1’s and 0’s) in those bytes. Where both bits are 0 or 1 the result will be 0, where only one bit is 1 the result will be 1.

As you can see the idea is very simple and can be used to create basic means of encryption in 5 minutes. It isn't exactly strong encryption but unless some evil person knows how the data was encrypted he'd have a very hard time making sense of it. It could be encrypted with a heavy duty 256 bits strong algorithm for all he knows.

Not only is it simple and potentially fairly effective, it should also be fast. Very. Mainly because the Intel x86 instruction set includes a XOR CPU instruction.

; the ah register now has 0x7B as value.
; ah and al are the higher and lower 8 bits part of the 16 bits ax register.

You don't need to understand the above x86 stuff. Just know that a bitwise XOR operation is usually very fast .

Using it your scripts or programs:

So, let's write a function that encrypts a file. F#:

As you can see it doesn't require a lot of code at all. Putting a text file trough that function will result in something like this: 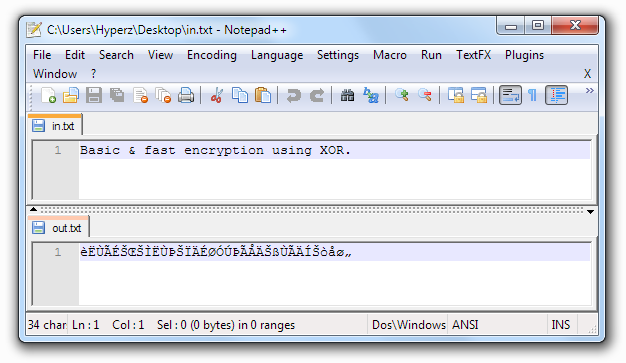 The idea will be the same for PHP, Python etc. And it doesn't have to be done on a file. For example you could use it on data stored in a database. Perhaps use it as an extra security layer on md5 hashes. It can be used for a lot of stuff. And considering the small amount of code and the performance there is no reason not to use it in places where you store sensitive data. In the case of desktop programs it could be used to secure in-memory data (perhaps passwords) or data in SQLite files.

So..:
I hope this was somehow useful for you, though I doubt there are many people here that will understand this (we don't have that many coders here). I did write this thing myself instead of copy/pasting from another resource and I'm not that good at explaining stuff so I hope it was somewhat understandable .

Update:
A bit of a more practical C# example can be found here. If you use it in your code be sure to enable the Allow Unsafe Code option in the projects Build settings.

May 16, 2010 in Tips & Tricks
Gmail Launches Custom Themes: Use Your Own Picture as Background

May 16, 2010 in Tips & Tricks
Are there Any Chances for iPad Competitors

May 16, 2010 in Tips & Tricks
Facebook Replaces Black Photo Viewer, Photos Are Bigger Too