Gmail has started its new service which allows users to make calls.
Gmail voice and video chat makes it easy to stay in touch with friends and family using your computer’s microphone and speakers. But until now, this required both people to be at their computers, signed into Gmail at the same time. Given that most of us don’t spend all day in front of our computers, we thought, “wouldn’t it be nice if you could call people directly on their phones?”

Starting today, you can call any phone right from Gmail.

Calls to the U.S. and Canada will be free for at least the rest of the year and calls to other countries will be billed at our very low rates. We worked hard to make these rates really cheap (see comparison table) with calls to the U.K., France, Germany, China, Japan—and many more countries—for as little as $0.02 per minute.

Dialing a phone number works just like a normal phone. Just click “Call phone” at the top of your chat list and dial a number or enter a contact’s name.

We’ve been testing this feature internally and have found it to be useful in a lot of situations, ranging from making a quick call to a restaurant to placing a call when you’re in an area with bad reception.

If you have a Google Voice phone number, calls made from Gmail will display this number as the outbound caller ID. And if you decide to, you can receive calls made to this number right inside Gmail (seeinstructions).

We’re rolling out this feature to U.S. based Gmail users over the next few days, so you’ll be ready to get started once “Call Phones” shows up in your chat list (you will need to install the voice and video plug-in if you haven’t already). If you’re using Google Apps for your school or business, then you won’t see it quite yet. We’re working on making this available more broadly – so stay tuned! 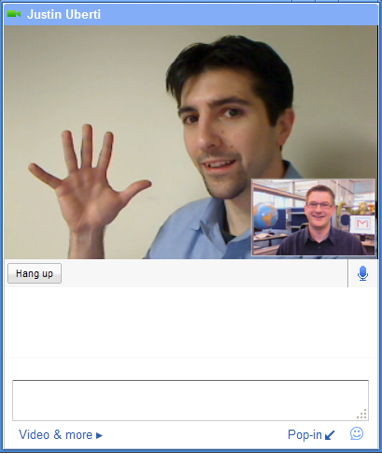 Google has finally released Linux version of Voice & Video Chat which it says was one of top video chat requests. It was already available for Windows & Macintosh OSes. They have support for Debian & Ubuntu systems at the moment while RPM systems will get one soon.

This is what the have on their official blog:

If you’ve been wanting to use voice and video chat on Linux (our top video chat request), then we have good news for you: it’s now available! Visit gmail.com/videochat to download the plugin and get started. Voice and video chat for Linux supports Ubuntu and other Debian-based Linux distributions, and RPM support will be coming soon.

Credits: Lifehacker.com for the image

Windows 7 is definitely one of the best looking operating systems out there, packs more eye candy than most operating systems but sometimes it can get a bit boring as you see it and use it everyday. That’s when the Snow Transformation Pack comes into play. If you like the simplicity and design of Mac OS X, you can transform your Windows desktop into a Mac OS X look a like. The transformation pack will completely change the way your system looks. It will alter the way your login screen, icons, wallpapers, sounds, dock, dialog boxes, and other UI elements look. The only thing you should worry about is that you have to disable the “User Account Control” to install it, if you haven’t already done so.

All in all, if you want a breath of fresh air for your Windows look, the Snow Transformation Pack is the way to go.