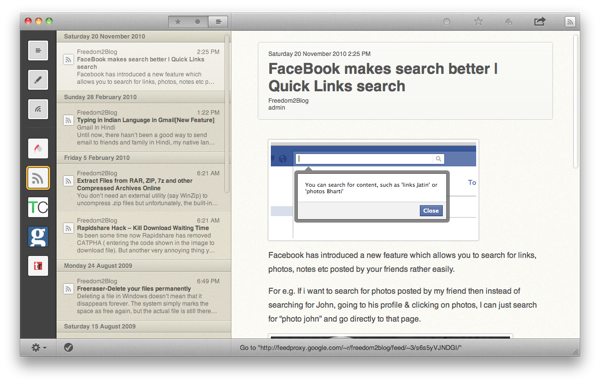 Reeder is one of the famous iOS application, and for good reason: it makes Google Reader feel smooth and Mac-like. Now you can get a (really) early view at Reeder’s desktop version.

The developer of Reeder for Mac calls this release a “Draft 1,” and notes that some fairly core functions—search, feed management, download management—are missing, and that a lot more is likely missing, too. But Reeder’s core mission of running your feeds through a filter with good fonts, crisp alignment, and a generally iOS-like interface is being accomplished. The iPad-like “Send” button in the upper-right offers a whole lot of options for saving and sharing articles, and the layout is helpful for those who like to run through their feeds in groups.

But for a first Beta release it looks awesome

Reeder 1.0 Draft 1 is a free download for Mac systems only & can be downloaded from:

December 3, 2010 in Freeware, Tips & Tricks
Are there Any Chances for iPad Competitors

December 3, 2010 in Freeware, Tips & Tricks
Get Your Blog Indexed by Yahoo and Google Real Fast

in Freeware, Tips & Tricks
Are there Any Chances for iPad Competitors