Does anyone stand a chance against the iPad?
The same that is happening in the world of smart phones is happening in the iPad world. Just as Apple has, the best iPhone and nobody can touch it, so it seems to be the case when looking at the competitors of the iPad. Samsung towards the end of 2010 released the Galaxy Tab and it did not fair to bad, but it still did not even come close to the iPad. HP publicly announced the release of their HP Touchpad, which will be launched in June 2011, but also made one big mistake. Their product will be launched after the debut of the competitions iPad 2, so if they stood any chance in getting a head start it surely is lost.
There are many other versions available later this year and we do have some information on some of them like the JooJoo from Fusion garage, which is currently the closest to shipping. It is also the most feature-barren of the iPad competitors and cost $500. It is an extremely simple tablet with a 12-inch screen and does not even have a SIM card slot for 3G.
Archos Tablet only has a 600 MHz processor and may be many peoples answer who does not want to pay $500 and upward. They will sell their tablet for only $179 and may have thought it will attract more interest when it is released in April, but we will have to wait and see.
Dell is also cooking up tablets of their own and the one they showed off is the Streak, but the size of it removes it from the iPads competition and relates more to the mobile Internet devices. Asus started the netbook craze and their 9-inch tablet, the Asus Eee is speculated as being able to run a Google mobile operating system.
Compal with their 7-inch Android 2.0 which runs with the Tegra 2 processor will be able to support video playback of 1080p and still maintain great battery life. According to Nvidia, they have several partners in the pipeline to design tablets with the Tegra 2 chip, so it can be expected to see more of this sort of tablet soon. Notion Ink also use the Tegra 2 chip and runs Android in their 10-inch tablet called Adam and use Pixel Qi screen technology that is great to use in direct sunlight. 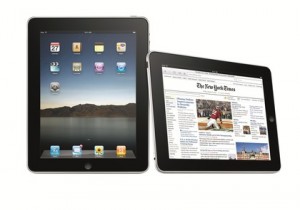 However, will all these features from some great companies be enough to remove the iPad from its throne? There is over 80 competitors and each try their best to come up with a new concept, whether it is size, hardware, or software to outshine the iPad. Not even lower prices and great applications can shift iPad from the throne, or so it seems currently and it is speculated that the iPad will definitely stay ahead of the pack through 2012 as well.